Those who knew Hemingford Abbots before 1978 will probably remember that the Village had its own primary school, which educated the local children from ages five to eleven and prepared them for secondary education. 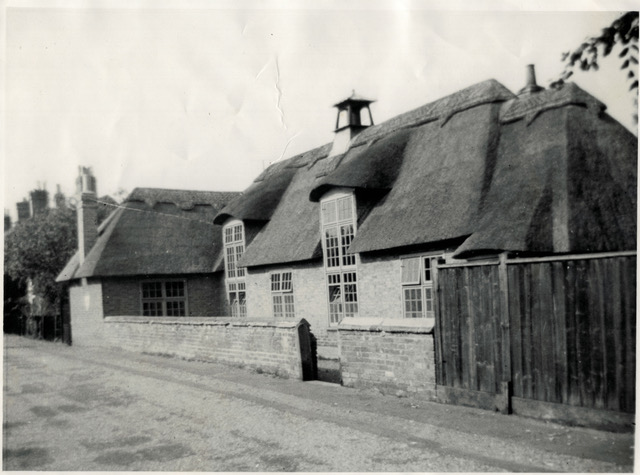 Its reputation for high academic standards and success in the ‘Eleven-plus’ examination, together with its friendly atmosphere and smaller numbers of pupils made it a popular choice for Village parents, and at times it even drew children from as far away as St Ives and beyond.

The fact that it was a Church school added an extra dimension to the children’s education: prayers and hymns were an essential part of the daily routine. Children were introduced to the Church’s liturgy in a way that was sympathetic and mature. There was no ‘dumbing down’ of religion; instead, the traditional language of the Church was used and explained, so that the children learned and understood the catechism, hymns, prayers, and Bible passages that would accompany them for life.

There was a close and fruitful relationship with St Margaret’s Church, and the various rectors would pay regular visits to the School for Scripture lessons and special assemblies. Similarly, the children would all attend St Margaret’s, above all at Christmas, where they would play a special part in the yearly Carol Service.

Sadly, by 1978, the School roll had dwindled to around 24, and the Local Education Authority, which exercised ‘voluntary control’ over the School, and, of course, funded it, decided that the numbers of children could no longer sustain a school in the Village. Thus, it was closed, and the children were transferred to the County Primary School in Hemingford Grey. 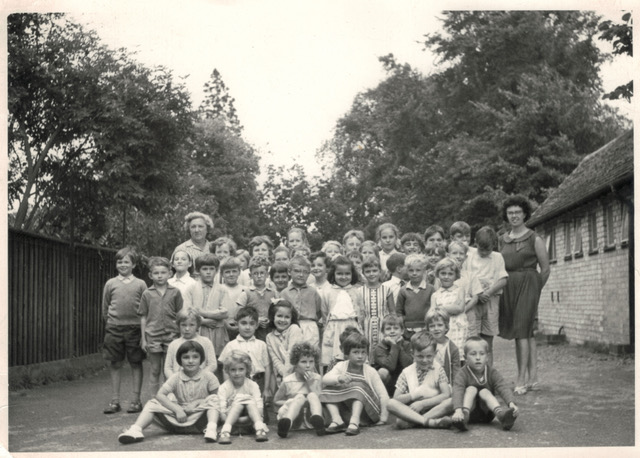 The photograph, taken in the playground in about 1960, shows a thriving school of over forty pupils. I am the boy standing on the far left. I can still recognize some of the others, some of whom still live in the Hemingfords. Perhaps those who recognize themselves or other people will get in touch. The two teachers were my grandmother, Mrs Blanche Cornell (back left), the Headmistress from 1947 to 1968, who taught Juniors (eight to eleven-year olds) and my mother (back right), Mrs Penelope Yeandle, who taught Infants (five to seven-year olds) from 1960 to 1978.

It is, of course, unusual to be taught at school by family members, but the whole School was like one big family, and the children were all treated with the care and concern appropriate to a family. Discipline came naturally, and punishment was hardly ever necessary.

The School was founded in 1867 (the year in which Queen Victoria laid the foundation stone of the Royal Albert Hall), when the Rector, the Revd Henry Herbert (1824-1911), in whose memory the East Window in St Margaret’s church was dedicated, gave the land for the building.

Henry Herbert was the great grandfather of the present Lord Hemingford, whose son, Christopher Herbert, was one of the youngest pupils on the School roll, when it closed in July 1978.

If it had not closed, in 2018 we should have celebrated its 150th anniversary and coincidentally the 70th anniversary of Mrs Cornell’s assumption of the headship.

In the early days, prior to the Second World War, the pupils reflected the mainly agricultural nature of the Village. The first entry in the Log Book for 1914 onwards explains how the School was reopened on 7 September 1914 after the ‘harvest holiday’ of five weeks. Poor attendance is a recurring theme: out of 58 on the books, only 42 were present on the first day of term.

In the days when people rarely travelled beyond their immediate neighbourhood, agriculture, Church holy days, the seasons, and secular holidays were part of the School’s cycle. On 5 October 1914, it is noted that several children were away with their parents at St Ives market. On 13 October, the children were given a half-day’s holiday to visit St Ives fair. The fair caused attendance to dip to 79% for the week.

Frequent visits by the Rector, the Revd Francis Falkner Herbert, son of Henry Herbert, to give Scripture lessons, were recorded. On Ash Wednesday (19 Feb 1915), the children went to church in the morning and had a half-day’s holiday in the afternoon. Similarly, even as late as 1958, Ascension Day was marked by a service in church, followed by a holiday.

Rain, snow, storms, and cold disrupted the smooth running of the School. Mrs Cornell writes, in the winter of 1963, that, despite ‘good fires in the stoves’, it was impossible to raise the temperature above 46 °F (7.8 °C). The children took it in turns to sit near the coal fires in the single cast-iron stoves at the front of the rooms and undertook much PE to keep warm.

Physical exercise, albeit of a not too strenuous nature, was encouraged, and the School held its own annual Sports Day on the Village playing field. Egg and spoon races, sack races, and many others provided an opportunity for pupils and parents alike to share in the friendly competition, and the pupils were afterwards rewarded with a crate of ginger ale, the kind gift of the Chairman of the Managers (governors), Mr Frank Rooke.

Netball was eagerly played in the small playground, which housed the specially built outside lavatories, in which the water froze in winter. Summer saw rounders on the playing field and country dancing on the lawns of several houses in the Village, for example at Whiteways and Barn Hall.

The Rectory lawn (now the house of Mr and Mrs Roger Dearlove) provided an adjunct to the playground, and Mr and Mrs Stevens, the Rector and his wife, welcomed the pupils to dance around the maypole to special records, played on the newly acquired electric gramophone. I believe we were the first school in the County to own and regularly use its own maypole. 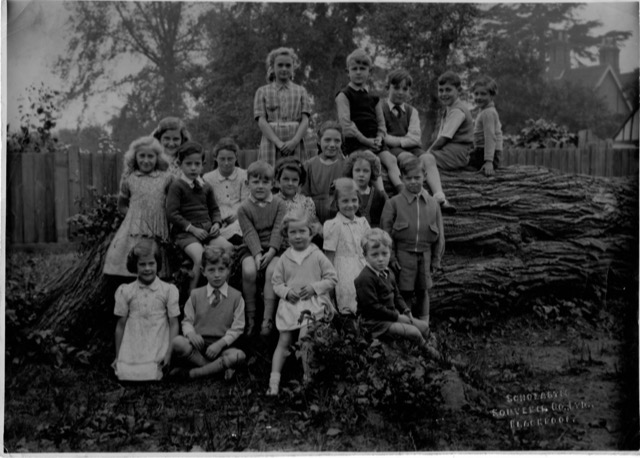